I have been collecting parts to add an oil filter to the engine for quite some time.  Winter and then building the stainless steel swingarm/cradle this spring put this project on the back burner.  Then came the PZ30 carb.  I finally decided to commit to adding an oil filter to the GX390 engine.  It also helped that I found the pump I had been wanting on sale.

I decided that I was going to pull the oil from both the front and rear oil drains.  That way oil would feed the pump no matter if I was going up or down hill.  I also figured I would pump the oil out for oil changes, so no need for a drain.

I considered returning the oil back to the engine through the valve cover.  But the more I read about the design of these engines, I opted not to go that route.  I never found anything that identified lack of lubrication to the valve train as being a weak point for these engines.  And from what I have read, the passage(s) that drain the oil back to the lower end are the same passage(s) that feed oil to the top end.  So my biggest concern was that dumping more oil than the engineers planned for down those passage(s) would interfere with the proper lubrication of the valve train.  Finally, I already had a hole tapped in the top of the block where the governor used to be, so that sealed the deal.

I had removed and installed the engine more times than I wanted to keep track of when I was building the swingarm/cradle.  I got curious how long it actually takes me to remove the engine.  Turns out it is just about 23 minutes.  That included removing the seat back because the basket was in the way of the rear panel access opening. 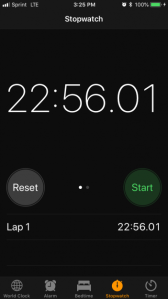 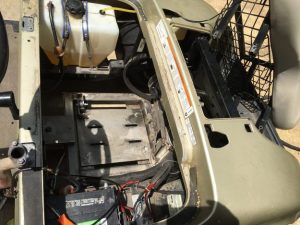 With the engine on the workbench I could get started. 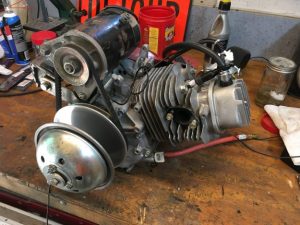 I also decided to remove the oil sensor while I had the side cover off.  I don’t know why I didn’t do that when I removed the governor when I first got this engine. 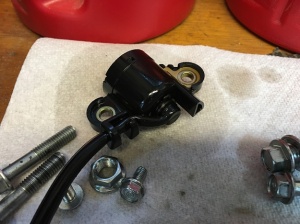 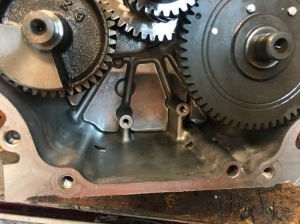 Plugged that opening and added the rear drain fitting: 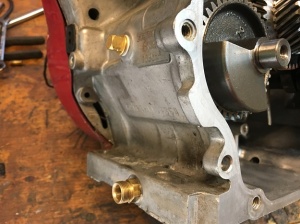 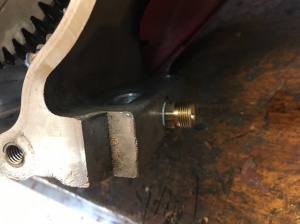 And finally the fitting for the oil return: 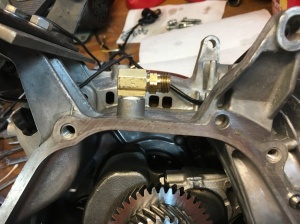 I wanted to use 3/8″ aluminum fuel line to plumb most of this system.  I thought the aluminum lines would help dissipate the heat as the oil moved through the system.  I was really impressed with myself that I nailed the bends on my first try. 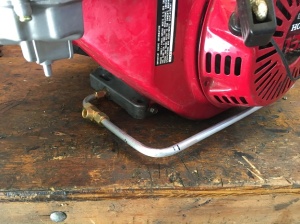 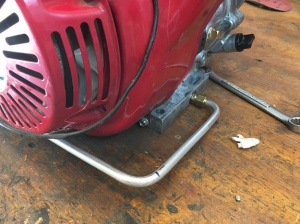 But as I sat back and looked at it, I talked myself out of using the compression fittings and aluminum line.  I figured that even if I tried my best to support the lines, the continuous vibrations would eventually cause a leak in one of the fittings.

So I switched out the compression fittings to barbed fittings for rubber lines.  At this point I was still planning on having lines run from both the front and back drain plugs.  I used some clear tubing and connected the front and back to a T fitting.  I experimented a little with tilting the engine up and and down to see how far I could tilt the engine before I got air in the line.  It turns out that I could tilt the engine up to a 24 degree angle and still pull oil through the fitting. 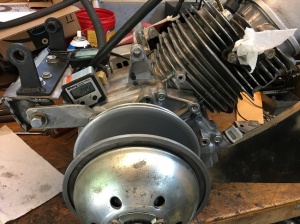 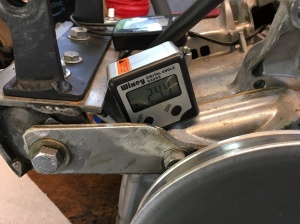 24 degrees is right at the point that oil is still in the tube: 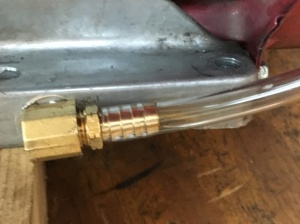 I didn’t think I would be able to tilt it that far and still pull oil, so I made the final revision to the system to just use the front drain fitting and plug the rear drain.  Pulling the oil from just the front will simplify things and will be one less place for a leak to occur.

This is the pump I will be using.  It uses about 3 amps, is rated for continuous duty and is self priming up to about 3 feet.  I got lucky and caught this on sale. It wasn’t that much more than the cheap, noisy pumps on eBay and Amazon. 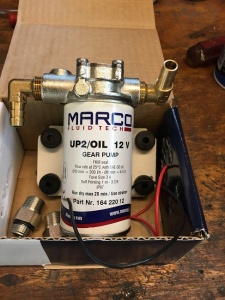 I wanted to mount it below the oil level so it would never have to dry start it.  There was really only one place for me to put the pump and pull that off.  Luckily I still had a few pieces of scrap stainless that I was able to weld up a simple mount on the front corner of the engine cradle/swingarm. 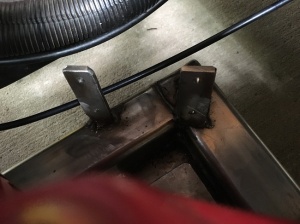 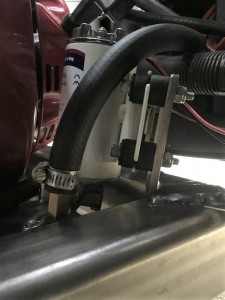 Top view.  The engine is about as far forward as it will ever need to be, but just to be on the safe side, I positioned the pump so I could still slide the engine forward 1.5 – 2 inches. 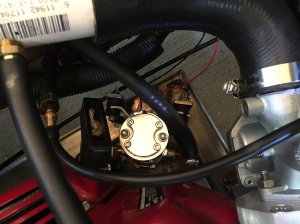 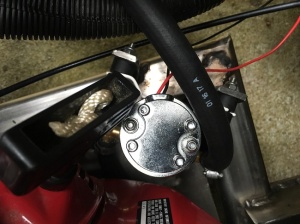 It was a lot easier to decide where to mount the oil filter.  I welded on a bracket to the frame here: 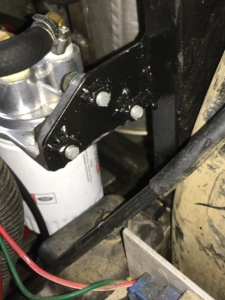 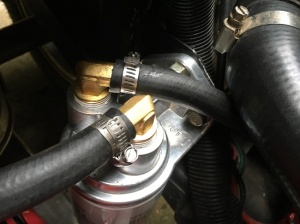 And that puts the filter next to the engine with enough clearance to remove and install it with no problems: 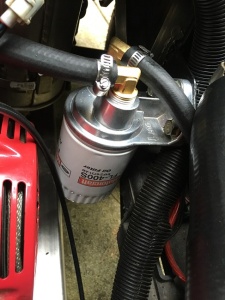 Turns out I think my concern about dumping too much oil through the valve cover was valid. This pump moves quite a bit of oil:

The last piece I needed was a way to control when the pump runs.  I currently have this timer set to run the pump for 15 seconds every 10 minutes. It is easy enough to change if that combination doesn’t work out. 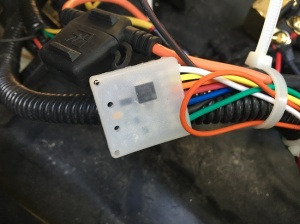 With the motor off and the seat down, I can’t hear the pump running.  I think I may hook up an indicator light somewhere so I can keep an eye on when it is running.

This entry was posted on August 5, 2018 by Harold Bawlzangya Racing. It was filed under golf cart . 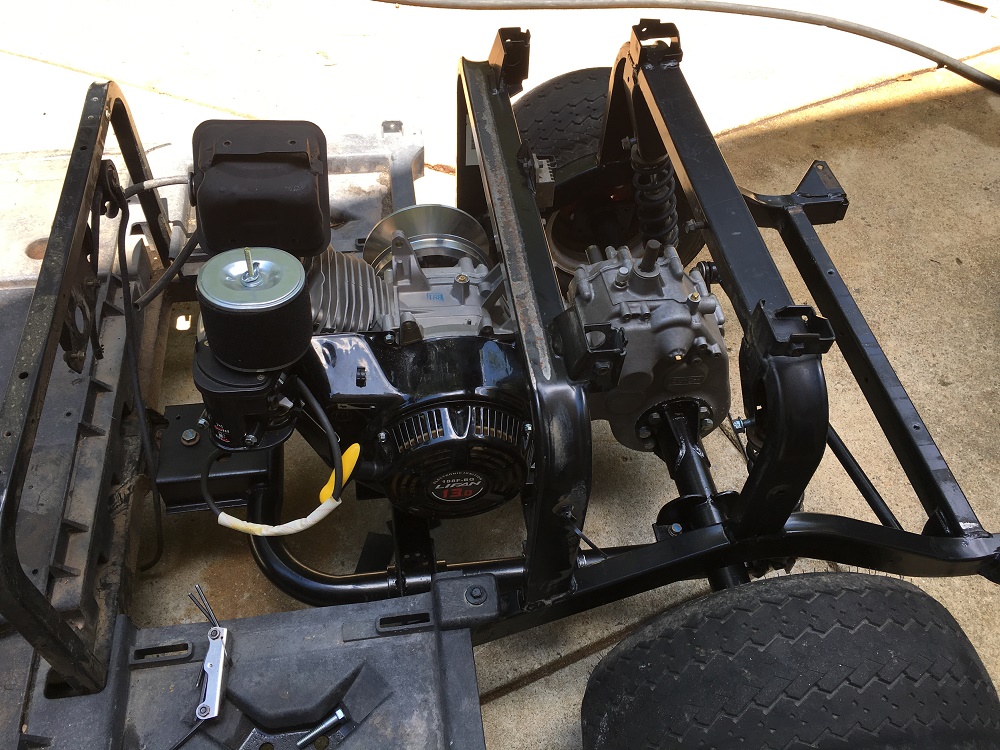 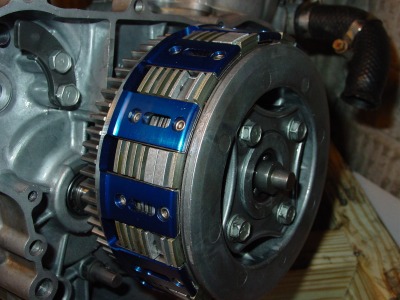 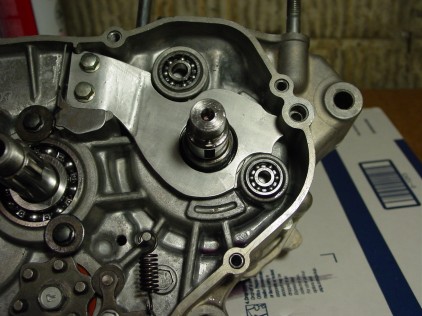